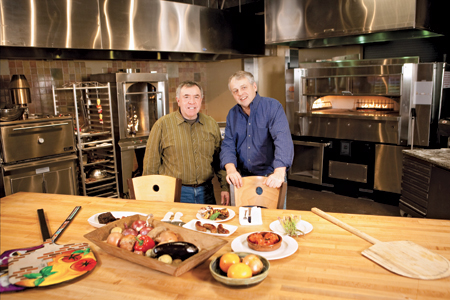 Fans of the flame-kissed pizza at Tom Douglas Serious Pie and Joe Fugeres Tutta Bella Neapolitan may be surprised to discover that the authentic Old World taste comes not from some venerable imported Italian oven but from a specialty oven manufactured in Bellingham.

In the past two decades, Wood Stones wood- and gas-fired commercial ovens have blazed their way into Seattles beloved pizzerias, Wolfgang Puck eateries, California Pizza Kitchens (more than 300 of them) and many more restaurants around the United States and beyond. Founders Keith Carpenter and Harry Hegarty have tackled a high-end niche market with a combination of a state-of-the-art manufacturing facility complete with robots, a large sales network and intensive customer care.

Wood Stone was born when a business acquaintance looking to start a restaurant talked to Carpenter about the need for a durable, reliable commercial wood-fired stone hearth oven. Carpenter, now 60, had been in the food service industry as a product representative since 1980. He was also a former hippie, who had heated and cooked with wood for years; he figured he knew what to do. He paired with Hegarty, a friend of a friend who had been building large-scale, high-temperature incinerators for the forest products industry.

In a workshop in Bellingham, they began building their signature ovens in 1990. They moved to Sumas in 1993; added gas-fired ovens in 1995 (today, gas constitutes 95 percent of their business); moved to and refurbished a building at the Bellingham airport in 2000 and added a 57,000-square-foot facility in 2007. In early 2011, the company boasted about 90 employees and 9,000 commercial ovens installed in 75 countries. Carpenter says annual sales in 2008 and 2009 were between $15 million and $20 million each year. 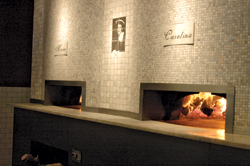 Wood Stone ovens are made of high-quality components, including steel exteriors. But what really distinguishes them is the deck, the surface inside the oven on which the cooking takes place. Composed of 3- to 6-inch high-temperature ceramic, the deck enables the oven to hold and distribute heat evenly. The deck reaches between 400 and 700 degrees, and temperatures in the oven can exceed 1,000 degrees.

When you are in the oven with the peel [the wood paddle for sliding pizza in and out of the oven] in your hand, it is you, the fire and the peel, and it brings you back to basics, Tom Douglas says. It is really rewarding.

Douglas, owner of seven Seattle restaurants and three Wood Stone ovens, says the ability to cook 12 hours a day with just 24 small sticks of apple wood blows him away. It is a marvel in the way it retains heat, he says. I think this is fantastic.

The rise of wood-fired cooking, made famous by Puck, certainly helped Wood Stone reach beyond specialty pizza shops and into mainstream cooking. Puck has more than 70 Wood Stone ovens; he calls it by far the best in its class. And demand is expanding for ovens to cook meat and bread. Wood Stone manufactures at least 38 varieties of ovens, including rotisseries, charbroilers, and pita bread and tandoor ovens.

Still, at $20,000 to $50,000 each, these stoves dont sell themselves. Carpenter used his experience as a product rep to build a network of nearly 200 independent reps around the globe. That strong sales force is essential for moving a product that is 30 percent more expensive than the competitions.

Wed love to be the same price [as the competition], Carpenter says. Ours simply costs more because of all we do and our support. He claims not a single Wood Stone oven has failed and that Bellingham support staff resolve issues immediately.

Of course, competitor Yotnegparian says his ovens (wood, gas and coal) are just as high quality, and, with less staff, his bottom line does quite well. He challenges Carpenter to a cook-off at any time.

Thats something Carpenter would be happy to host. With a massive test kitchen on-site in Bellingham and more than a dozen kitchens around the country and in the United Kingdom, Hong Kong, Mexico and Toronto, Carpenter invites prospective clients to cook in any of his products. (That sold chef Douglas.) 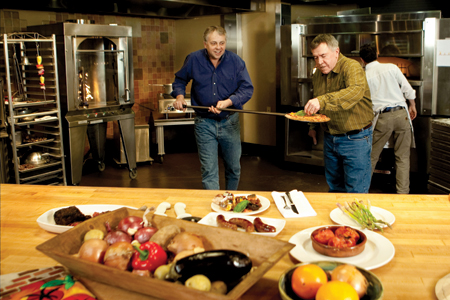 Ultimately, Carpenter says, he wants to create a lasting legacy in Bellingham, and moving to China wont accomplish that. We looked at going overseas. We even priced it out and made a conscious decision to keep the jobs here, he says. So, he went robotic, investing about $8 million in a metal fabrication system since 2007 (this is on top of the $4.8 million cost of the new building). Now, instead of outsourcing most of the metal work, almost everything is made there. Plus, with metal fabricating possible for more than ovens, Carpenter and Hegarty launched a second companyWood Stone Metal Worksto take make use of the plants excess capacity.

We are committed to creating jobs in our community and we have chosen to invest in equipment to make that possible, Carpenter says. It is one of the most automated sheet metal systems on the West Coast. With it, Wood Stone will be able to stave off the need to move to China. Now, five local workers can do the work of 40 overseas because of the technology.

To keep the employeesand robotsbusy, Wood Stone has stepped further into the international market. Since more than 30 major competitors are in Italy and Australia, Wood Stone focuses on the U.K., the Middle East, Asia, of which India is a major part, and Latin America and the Caribbean. The company also sees expanding a new residential line as a growth opportunity.

Though domestic commercial sales were down 31 percent in 2009, international sales and residential sales were up a bit. We have gotten good enough at it we can be competitive internationally, Carpenter notes. More important, Wood Stones investment in manufacturing helped keep costs down, enabling the company to produce components that had previously been contracted to outside fabricators. Consequently, even in the downturn, the company expanded by 30 people.

Whether in Shanghai (Wood Stone builds a specialty duck oven for the Asian market) or Seattle, chefs ongoing love affair with firecavemen gone technicalmeans a hot future for Wood Stone.