Colville-based Hewes Marine Company is the winner of the Gold Award. 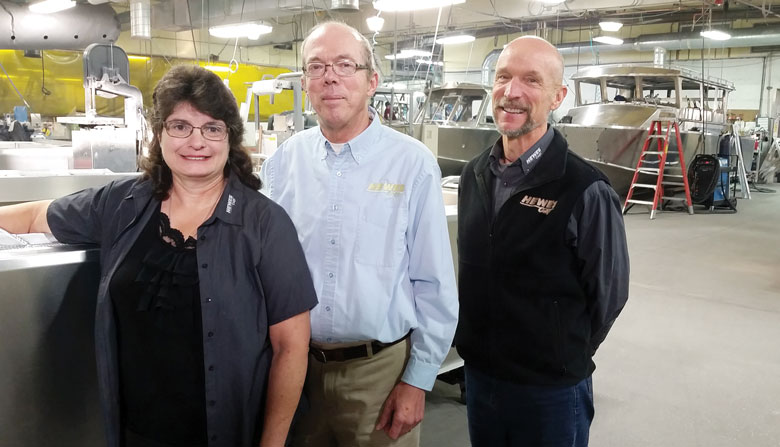 FULL SPEED AHEAD: Dave Hewes, right, and Bill Hewes with Bills wife, Launa, on the production floor of the Hewescraft factory in Colville. Photo courtesy of Hewescraft.

After World War II, brothers Bob and Ralph Hewes first tinkered with making a hobby boat. Ralphs son, Dave Hewes, president, says the brothers grew up poor in Colville but worked odd jobs to buy an airplane. They later operated a flight school. Bob and his friends decided theyd make a few boats for themselves from scrap aluminum in an airplane hangar.

Hewes Marine Company took off by 1948. Dave recalls his dad recruited him and six siblings in childhood to do odd jobs in the factory.

By the 1950s, his uncle Bob had left for other pursuits. Dave and brother Bill Hewes eventually took over the company, with their dad working until around age 80. Today, Hewescraft employs 144 workers and makes nine series of boat models ranging in length from 16 to 26 feet.

Between 2014 and 2015, revenue rose 10 percent, followed by a 3 percent rise the next year. To keep pace, Hewescraft has expanded factory space, signaling a bounce-back from the Great Recession, when the company laid off about two-thirds of its workers and instituted across-the-board pay cuts. As sales rebounded, employees and higher wages returned.

Seeing more growth opportunity, family owners recruited three experienced directors. Bill and Dave have cut back their hours but are working to engage the next generation. Sixteen third-generation family members are now involved in formal succession planning. Dave Hewes gives his dad credit for creating an ongoing sense of family ownership and involvement.

Its also to honor God in all we do, he adds. It helps us keep a moral rudder.

Founded in 1980 by Mike Arnold, the company has Seattle, Spokane and Portland offices serving clients across five Northwest states and multiple industries. A commercial furniture dealer, it tailors client environments.

Mike Arnold is CEO, son Matt is president, and daughter Michelle is vice president. They own 85 percent of the stock. Tom Schauer, CFO and non-family member, owns the other 15 percent. Company policy is to keep family issues off premises. After hours, the Arnolds keep the focus on the family.

Two brothers, Don and Bud Mowat, owned property near the University of Washington and sought someone in 1952 to run a restaurant. They offered the lease to Phil Jensen, who cooked up a family business famous for its burgers, fries and shakes.

Burgermaster now has six locations and legions of fans in love with its midcentury vibe.

Jensen, who died in 2009, cherished this motto: Give the customer a better deal.

Today, four family members hold shares in the company and more than 100 employees work in the business. Phils wife, Mary, an avid gardener, landscaped each location.

Other recipes for success: The founders children meet for Saturday conversations at Moms house in Seattles Pinehurst neighborhood. They also find ways to manage growth without incurring debt.