Offices are in for a Slow Rebound 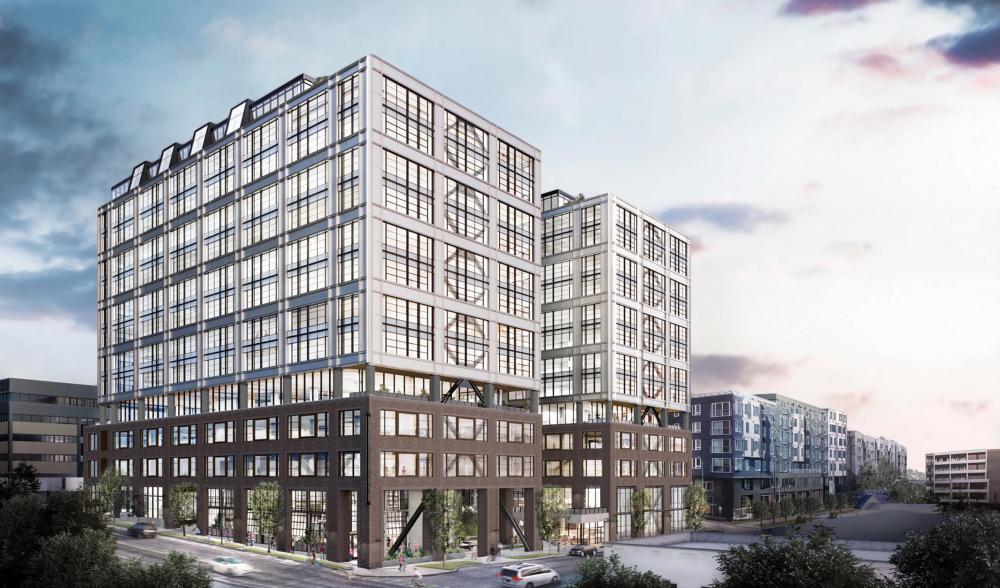 After a year when downtown office towers across the Puget Sound region resembled ghost towns, commercial real estate experts are optimistic that the lights will gradually begin to flicker back on.

The emerging hope follows a Covid-19 exodus that was both abrupt and prolonged. Employees packed up their computers and turned kitchen tables and basement rooms into home offices. Sublease space flooded the market as companies reconsidered their future office needs. Some retailers and restaurants were unable to weather the pandemic, abandoning their ground-floor leases for good. As the virus swept the world, the once-thriving local commercial real estate market was forced to hit the brakes.

Now, commercial real estate players are beginning to contemplate the slow climb back to normality. While Covid-19 closures hit like a tsunami, the recovery will likely be more measured. Downtown Seattle and Bellevue office towers remain only 10 to 15 percent physically occupied as employees continue to work from home. Office demand will depend on how soon companies decide to return, and if they plan to occupy the same amount of space as they did before the work-from-home experiment. The return of ground-level retail shops and restaurants may take years, and many will never return.

As of the beginning of 2021, the market remains very quiet, says Grant Yerke, principal at commercial real estate brokerage Broderick Group. He likens the pause to the waiting period surrounding the 2008 recession, when companies didnt want to enter new long-term leases.

Everyone is trying to push off decisions, Yerke says. While recovery will take time, market observers are also optimistic that it will happen. They point to the continued economic strength of the Puget Sound region. The areas biggest technology companies arent backing out of their leases and are moving forward with plans for new spaces.

Once we get past Covid, theres no doubt that the trajectory of the Eastside is only going one way, and thats up, Yerke predicts. In Seattle, developers continue to construct and complete projects that began before the pandemic hit. The new offerings somewhat misleadingly increased vacancy rates, says Jacob Pavlik, Colliers International research manager for the Puget Sound area and Portland. Office vacancy in the Seattle market went from 8.2 percent to 9.6 percent in the fourth quarter of 2020, but mainly because 1.5 million square feet of new space hit the market.

There was a lot of confidence in Seattle, and everyone was emboldened to build, Pavlik says.

One such builder is Martin Selig Real Estate, which will finish construction on two new downtown high-rises this year. The Federal Reserve Building will have 200,000 square feet of office space, and the Third and Lenora building includes both offices and apartments. Martin Selig Real Estate just started construction on another big project at 400 Westlake, and that building is slated to open in 2022. The companys Executive Vice President, Jordan Selig, says that her company reasons the pandemic has created a difficult but temporary situation.

In real estate, we generally think in 10- to 12-year cycles, Selig says. Its a long-term perspective.

Even though downtown Seattle offices sit vacant, several brokers report that companies have continued to make their rent payments. Many of the regions tech and professional firms have thrived throughout the pandemic, meaning they dont need to break long-term leases. Selig says her companys tenants are among those paying rent even if they arent currently occupying space. The diverse tenant base ranges from big tech companies to small law firms to day cares.

I feel very lucky to say that our collections have been strong, Selig says.

Some segments of the commercial real estate market didnt slow at all during the pandemic and are expected to continue a growth track this year. Fueled by e-commerce, demand for industrial space remained high in 2020, and 5 million new square feet of space came on the market in the Puget Sound area. Life science laboratories stood out as another bright spot during the pandemic.

A massive new life-science property, Dexter Yard, will open in South Lake Union later this year. The 500,000-square-foot building will include 150,000 square feet of potential lab space. Investors continue to bet on the future of the Puget Sound market as well. While the leasing front remains quiet, investment sales have been quite active, Yerke says. Most of the buyers are based on the West Coast, but some have been international. Given that the pandemic hasnt had a negative effect on the markets, plenty of buyers are still flush with cash and able to invest with an eye toward the future.

There is still a huge backlog of capital, says Beth Halvorsen, executive managing director of Colliers International Puget Sound. If youve been through multiple down cycles, you see this as an opportunity.

Because of the continued strengths of the local market, commercial real estate insiders are hopeful that the pandemic presents a sobering but temporary downturn. To be sure, the rebound will be influenced by the areas of commercial real estate that have struggled the most. One of those is the amount of sublease space available.

At the end of 2019, there wasnt a single full floor on the sublease market in downtown Bellevue, Broderick Group data show. As of the beginning of 2021, 30 full floors were available for sublease. The available sublease space in Seattle went from 750,000 square feet last spring to 3.8 million square feet at the start of 2021, Broderick Group found, with more likely to come over the first few months of the year.

We have seen a massive glut of sublease space, Yerke says.

According to Lisa Stewart, managing director of JLL Seattle, most of the companies trying to unload extra space are smaller, venture-backed tech firms concerned about the immediate bottom line. The regions largest tech companies have not downsized office space. Many continue to expand even though most of their employees work from home.

Pavlik predicts much of that sublease space will come off the market once employees return to work. The question remains, however, exactly when companies will decide it is safe enough to return to the office, and if they will occupy the same amount of space as they did prior to the pandemic.

Many real estate observers are bullish on this point, saying they believe working from home isnt an optimal environment for many employees in the long run. Parents contend with noise from young children and apartment dwellers lack space to separate work and home life. Singles with roommates end up competing for desk space and working over one another.

The novelty of working from home has worn off, Selig says. When people are able to go back to the office, theyll run to get there.

However, nobody knows exactly when that will happen, and many staffs are divided. For every office worker who loves the flexibility of a home office and the ability to ditch the commute, theres another who misses social interaction.

The workforce will likely continue to be divided on preferences regarding working from home, and highly individual factors such as home environment and
commute time will influence those perspectives.

Are you a 20-something or 30-something who lives alone, or do you have four different roommates and cant wait to be back at the office with the cold brew tap? Pavlik asks.

From a company standpoint, leaders say its unlikely that remote work could ever replace a physical office completely because of the benefits of gathering with coworkers. Zoom calls dont replicate the physical cues and energy of interacting in person. Creativity and innovations are more likely to occur when working with other people.

Doug Demers, managing principal in Seattle for B+H Architects, has been studying the pandemics impacts on the future of the office. He cites a global poll showing that 72 percent of workers want a hybrid approach, with time both in and away from the office. Demers predicts that virtual options will be popular, but companies are not going to give up on collaborating in person.

If you go beyond a certain amount of time in those virtual meetings, its taxing, Demers says. In a creative activity, its really difficult to read body language online.

Yerke and Broderick Group Vice President Maverick Olivares say clients tell them that although they envision more flexibility with working from home part time, they do not intend to stay 100% remote. While some employees working from home could theoretically shrink overall office space needs, many prefer their own desks over a shared communal area. The tech companies building and leasing new space in Bellevue have made no plans to reduce their footprint, Yerke and Olivares say.

The positive news is that people are coming to the conclusion that they need an office space, Olivares says.

Office workers have the option of working from home, but laboratory scientists do not, and thats resulted in continued high demand for life-science space during the pandemic. In South Lake Union, life-science vacancy was just 2.3 percent, compared to 4.2 percent for office space in that neighborhood, Pavlik says.

I am confident that Seattle is increasing its emerging status as a life-science market, Pavlik says.

Mike Ruhl, vice president of BioMed Realty, a San Diego-based company that operates a Seattle office, says the pandemic aided the life-science industry, as global focus turned to medicine and vaccines. Life-science companies continue to call his office in search of space.

BioMed Realtys new project, Dexter Yard, includes floors outfitted for life-science laboratories. The building will open in South Lake Union in the fourth quarter of this year, and Ruhl is confident in the ability to attract tech and biotech companies to the project. Three floors with a higher floor-to-ceiling span can support labs, and high-tech ventilation and filtering systems throughout the building will create healthier air flow for companies concerned with the indoor spread of germs.

As life science continues its growth trajectory, real estate experts are hopeful it will assist the regions recovery during the next few years. For now, the commercial real estate industry waits to see the impact of vaccines. Most expect a slow crawl back to normalcy.

Theres a lot of uncertainty, but I think theres light at the end of the tunnel, Halvorsen says. Pavlik predicts it will take a couple years for the commercial real estate market to return to where it was at the beginning of 2020. He predicts the regions life science and tech companies will fuel the recovery, but that it will take time to fully recover from the pandemic.

Im not going to promise anyone that 2021 will be an amazing year and that well be singing Kumbaya in the office, but I think things will get better, Pavlik says. Im super excited for 2021 because its not 2020.