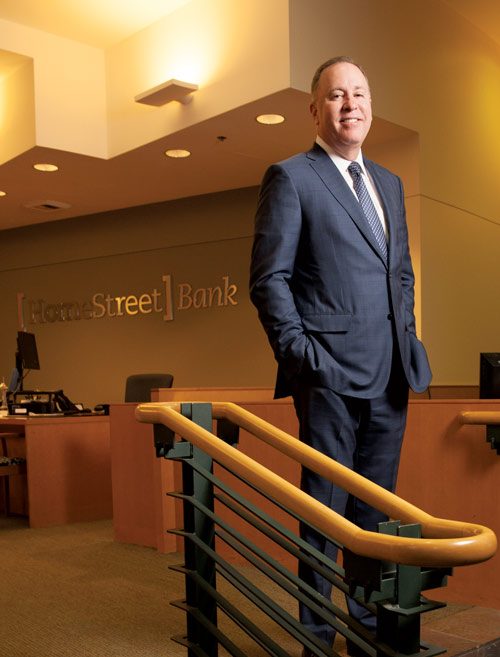 Appointment of a turnaround CEO can signal harsh changes, big cutbacks and fear. But for Mark K. Mason, taking the helm of troubled HomeStreet required more leadership, not fewer hands. From long experience that included lifting California-based Bank Plus Corporation from the doldrums and leading startup energy financier Tefco LLC, Mason knew  the Seattle company had to grow its way out of danger, not shrink.

“When you change leadership and strategy,” Mason says, “it’s much like taking the lid off a box and letting the light in.” Given clear direction, he has found, employees who seem listless become highly functioning.

Like many financial institutions, HomeStreet’s banking arm, which began with its 1921 founding in Seattle’s University District, had grown too dependent on construction lending gone sour. Mason returned the bank’s focus to its historical one of home mortgages and also diversified into less cyclical consumer and business lending. Even as HomeStreet is now the state’s largest provider of home mortgages, that business represents a minority of its total holdings.

HomeStreet’s IPO in 2012 helped recapitalize the bank, and Mason has accelerated growth by acquiring other commercial banks to expand into new markets.
The next challenge Mason faces is managing and supporting success, building structure and acquiring quality personnel. Having turned HomeStreet around, Mason prefers these problems to the ones he started with.