Tacoma: Another Date with Destiny

The city prepares for its moment of (re)discovery. 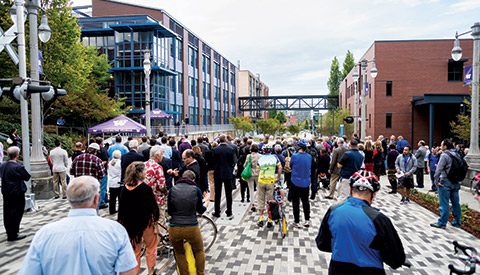 The city prepares for its moment of (re)discovery.

When Russell Investments announced in 2009 that it would move its headquarters from Tacoma to Seattle, Tacomans were crushed. What hope did the city have if it couldn’t even hold on to a company whose founding family had always been loyal to the area? As if on cue, home prices plummeted and unemployment soared, reaching a high of 11.9 percent in early 2010.

Hope is returning thanks to a growing interest in the city’s affordable housing, a strengthening commercial office market and a downtown core filled with historic buildings primed for refurbishment. Tacoma’s unemployment is down to 5.7 percent, and confidence among regional business leaders is rising.

The 12-story headquarters that Russell vacated has been filled by 1,300 State Farm employees. Sevag Sarkissian, a State Farm spokesperson, says the Tacoma location was selected because of its proximity to the Tacoma Link Light Rail (and the promise of Sound Transit’s extending regional light rail from Seattle to Tacoma) as well as the University of Washington Tacoma campus (where employees can use their tuition-reimbursement benefits).

To be sure, Tacoma, known as the “City of Destiny” for nearly a century and a half, still has its challenges. The city of more than 200,000 has a lingering image as a foul-smelling, blue-collar industrial town. Few can forget the sulfur smells released from a nearby pulp and paper mill even though new pollution-control technology largely eliminated the odors in 2002.

Tacoma finds itself in the midst of a remake. Point Ruston, a $1.2 billion residential and retail development, rises on a North Tacoma waterfront parcel that once housed a copper smelter and later became a Superfund cleanup site. The city’s eminently walkable downtown, complete with inexpensive parking and affordable housing, has begun to attract residents and investors alike.

“The arrival of State Farm helped to reinvigorate the downtown and has attracted service, restaurant and other supportive businesses,” says Ricardo Noguera, Tacoma’s director of community and economic development. He says State Farm’s decision became a “catalyst for new development and property acquisitions.”

Now, he adds, developers are building luxury apartments to attract Seattleites in search of affordable housing. “Tacoma is much more reasonably priced than Seattle and Bellevue, and that starts to attract investment,” notes Noguera. He anticipates more than 700 multifamily, market-rate units will open this year.

Point Ruston will also help respond to the demand. When completed, the property will have more than 1,200 condo and apartment units. Loren Cohen, legal affairs manager for Point Ruston, says the units are filling as soon as they become available. “We continue to chase demand,” he says.

The strong market attracts outside investors. A San Diego company recently paid nearly $30 million for Vue25, a new downtown apartment building with 163 units. McMenamins Inc., whose pubs and breweries are often harbingers of a neighborhood’s impending turnaround, has decided to transform the historic Elks Lodge at 565 Broadway Ave. into a hotel and brewery. McMenamins CFO Chris Longinetti says the company will invest more than $25 million to renovate the building. Construction starts this spring and the restaurant will open in summer 2017. McMenamins is also in early negotiations to give the same attention to the old City Hall a few blocks away.

The retail district around the UW Tacoma, at the edge of downtown, also attracts strong interest. Steve Rosen, owner of Seattle-based Elemental Pizza, says he opened a new location last October in a 3,600-square-foot space owned by the university after being impressed by the area.

“We looked around Tacoma a lot before deciding to open Elemental here and we were just amazed at the character of so many buildings,” Rosen says. “People have been talking for years about the resurgence in the area, and when we looked at all the changes along Pacific Avenue, it just felt like the timing was right.”

UW Tacoma, with its student and faculty population of 5,000, plays a major role in attracting people to downtown. It hopes to play an equally important role in building its future. UW Tacoma’s Institute of Technology and its Center for Data Science, a research arm that is an incubator for tech startups, hope to launch new tech companies while attracting more established ones from elsewhere in the country.

Because the students are sought after by companies like Boeing, Google, Microsoft and Facebook, most of them leave Tacoma. Andrew Fry, assistant director of industry partnerships and a lecturer at the institute, hopes downtown Tacoma becomes a hotbed for tech startups. “I would like the technology industry to be one of the robust clusters we have,” Fry says. The city is also interested in developing clusters around financial and professional services.

To attract more employers, Noguera says Tacoma must market the area to office users. “Those being forced out of the Seattle/Bellevue market are good targets,” he notes. “Those expanding from the Bay Area, such as Google, Oracle and Facebook, are also good prospects.”

While Tacoma is looking healthier — Class A office space in the city was 92 percent occupied as of January — developers are not confident enough to build new office space on spec without first pre leasing tenants. Three Class A buildings have been successfully launched since 2001, and all had significant portions preleased.

“Preleasing will continue to be important,” explains Harrison Laird, a broker at the Tacoma office of CBRE Group. “I couldn’t see more than a third of a building being built on spec.”

However, overseas investors may be ready to take on more risk. In a preliminary deal signed last August, Chinese developer Xunkun Luo, CEO of Wuhan Boshengshiji Real Estate Development Company, agreed to buy a 6.4-acre city-owned parcel near UW Tacoma that is the largest undeveloped area of downtown. The company would pay $3.5 million for the land and build in two phases 360 or more residential units, 90,000 square feet of office space and 200,000 square feet of commercial space. It is expected to break ground on Phase 1 of the proposed Town Center this fall.

To help finance their respective projects, the two developers are using the federal EB-5 funding program that grants a path to American citizenship to foreigners who invest $500,000 or more and create a prescribed number of jobs.

Those deals could yet collapse given the  turmoil in Chinese financial markets. But Carino, whose firm completed The Henry  complex on Dock Street, is so confident Tacoma is coming out of the recession strong that he and his brother  have plans for a second apartment building in Tacoma’s Stadium District, expected to open in May 2018.

Reflecting perhaps the motto of the City of Destiny, Carino declares, “We’re definitely not nervous.”