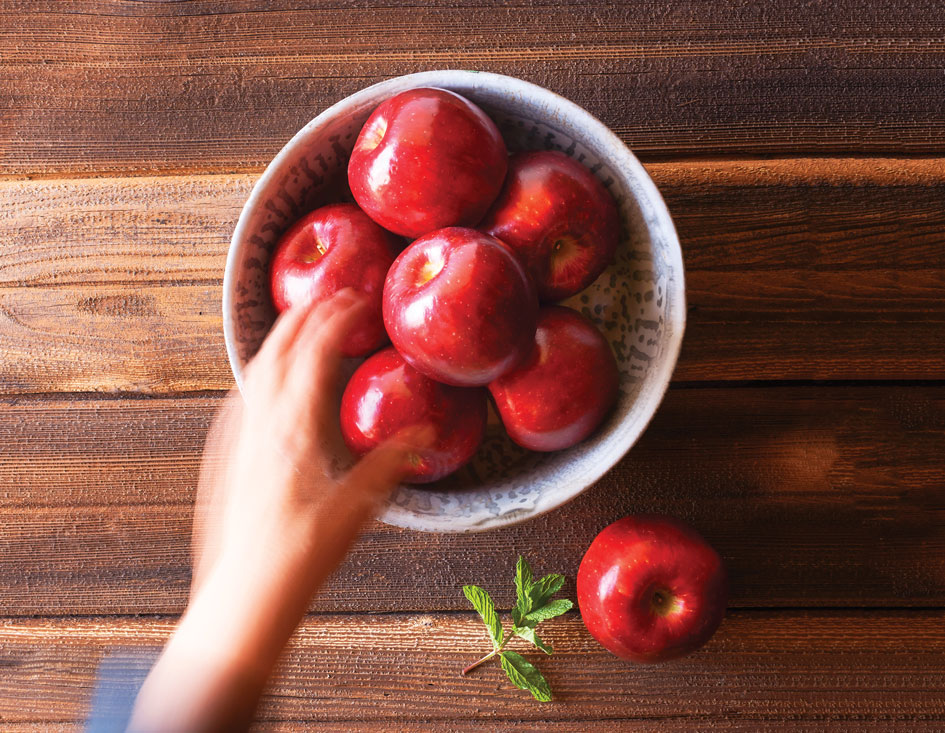 AN APPLE A DAY. The future of the Cosmic Crisp is about to play out, assisted by a multi-million-dollar marketing campaign that seeks to convince consumers to make it their apple of choice.

This fall, Washington state consumers will get their first bite of a new apple called the Cosmic Crisp. Will they like it enough to buy a second?

More than 400 Eastern Washington fruit growers who have invested more than $500 million to grow it hope so. So do Washington State University’s 10 regents, countless WSU administrators and Yakima-based Proprietary Variety Management, or PVM — the small firm that is spending $10.1 million during four years to market the apple to consumers. It’s the largest consumer launch of a single apple variety.

There’s a lot riding on the much-anticipated new apple, which is only the second variety chosen by WSU breeders for commercialization. Washington growers, who produce 70% of the nation’s apples, according to the Washington Apple Commission, are betting the homegrown Cosmic Crisp will replace their faltering flagship, the Red Delicious. In 1986, the Red Delicious, imported originally from Iowa in the 1870s, represented 75% of all apples grown here.

But the Red Delicious, which is one of the nine or so main varieties of apples grown in Washington state, turns mealy from the long storage it needs to remain available nationally all year. Consumers complained, sales declined and growers removed some 82,000 acres of the Red Delicious from production, often in favor of new varieties — most recently Cosmic Crisp. Today the Red Delicious accounts for only 34% of Washington’s total crop. Most important for Washington growers, the Cosmic Crisp ripens at the same time as the Red Delicious, making it an easy swap in the orchard, packing houses and, growers hope, on store shelves.

For the first 10 years, only Washington state growers can grow Cosmic Crisp.

The Cosmic Crisp’s grocery debut will be unprecedented in the apple industry. Sales of Cosmic Crisp in its first year, initially projected at 175,000 but now at 467,000 boxes at 40 pounds each, would equate to some $14 million in industry sales. That revenue equals sales, measured in 2018 dollars, of the Opal apple (launched in 2010) and the Cortland apple (debuting in 1915) and is nearly double the 2018 sales mark of $8.7 million for the SweeTango — introduced in 2009.

That second-year volume puts the Cosmic Crisp on the national stage at yet another unprecedented pace. It typically takes 15 to 20 years for a new apple variety to be available in large enough quantities to fill produce sections nationally during the fall selling season. It then takes much larger quantities to keep an apple variety on grocery shelves all year.
If the Cosmic Crisp fetches $30 a box and consumers love it, the apple variety, at some 2.2 million boxes in second-year sales, will generate $66 million in revenue. It instantly competes with apples branded Ambrosia ($70 million in 2018 sales), Jazz ($55 million) and Envy (nearly $54 million). That’s heady company. Although it has taken 14 years, Ambrosia has steadily climbed into the top 15 ranking of apples sold nationally.

The actual marketing campaign for Cosmic Crisp is unusual for a number of reasons. Brandt says the overall $10.1 million marketing push is necessary to establish the Cosmic Crisp quickly, so it instantly is available nationwide all year. They are making a very large bet consumers will love it. Diverting millions in royalties is a first for WSU, which currently has an $8 million operating deficit. PVM is acting as the general contractor, receiving a 3.3% annual management fee, which equates to a total of some $330,000 over the four years. That’s in addition to a percentage of the tree and fruit royalties PVM will get.

Marketing will be funded initially from WSU’s tree royalty. The university receives 65 cents of the $1 royalty for each tree sold. PVM gets the remaining 35 cents. The Cosmic marketing campaign also will be funded with WSU’s portion of the 4.75% fruit royalty assessed when the Cosmic Crisp sells for $20 or more a box. WSU will receive 75% of those royalty funds, with PVM receiving 25%.

PVM estimates WSU could gross a total of $125 million in fruit royalty by 2029 if the apple sells for an average of $31 a box throughout its first 10 years on grocery shelves. If so, it would be WSU’s largest-ever royalty stream. Last year, WSU reported it grossed $3.9 million in tree royalties. LAUNCHPAD. After two decades in development, the Cosmic Crisp is coming to fruition in Washington. The apples on this page are part of a WSU test block at Stemilt Growers in Quincy. Photo by Navid Baraty

The Cosmic Crisp consumer-marketing plan doesn’t deviate much from the standard apple or fruit marketing playbook. It relies on items such as creative packaging, in-store promotions, event sponsorships — including pop-up retail stores — and recipe tie-ins with popular chefs, restaurants and retailers. Two big advantages are the apple’s taste and long shelf life. Growers and WSU scientists say the sweet, dark burgundy piece of fruit tastes better after months in storage.

The 2019 Cosmic Crisp soft launch campaign, titled “Imagine the Possibilities,” “speaks to this apple setting a new bar for flavor, presentation and storage, and as a category breakout inspiring chefs, families and apple lovers,” says Kathryn Grandy, director of marketing at PVM. Unlike other premium apple varieties, the Cosmic campaign is not directed at a specific demographic, she says, but “targets shoppers who frequently purchase apples.”

According to the marketing plan PVM shared with top growers and WSU, a cornerstone of the effort is a five-year sponsorship of Missoula Children’s Theatre productions, which started with the February premiere of Johnny Appleseed. Playing off the apple’s space-themed name, PVM also plans to sponsor space camps featuring astronauts and deploy a team of social influencers known as the Produce Moms, to help promote the apple on social media. Initially PVM planned to outfit Airstream travel trailers as part of the space-camp promotion but those plans have since been nixed, Grandy says.“The initial launch plan is a living document,” and subject to change, Grandy adds.

PVM has forged a relationship to win the newly created Good Housekeeping‘s Nutritionist Approved Emblem and has paid for story placements in Good Housekeeping magazine. The team is working to land Martha Stewart and chef Emeril Lagasse as brand promoters and strategizing with the Produce Moms, which has relationships with Kroger and Walmart.
As aggressive as the plan is, it faces some significant challenges. For starters, apple sales are declining, recently falling 5% in dollar sales and 8% in unit sales, according to data from New York research firm Nielsen. And, premium apples like the Cosmic Crisp cost more.

It’s the same color as the Red Delicious, and consumers could mistake it for that variety. It also shares a parent – the Honeycrisp – and has a similar taste. It faces intense competition from numerous varieties of premium apples at a time when apple sales are declining.

And, apples historically haven’t been marketed to consumers. Instead, growers and what’s known as “sales desks” sell apples to retailers and spend trade dollars on in-store promotions. Direct-to-consumer campaigns are rare.

Here’s how PVM will spend most of the $2.6 million budgeted in 2019 for marketing the Cosmic Crisp:

“From what I can see, the marketing plan contains the same elements as marketing plans for other new varieties. You could substitute any other variety name and product story for the ‘Cosmic Crisp’ name in the campaign documents,” says Desmond O’Rourke, a global apple-industry analyst and agricultural economist. “Cosmic Crisp’s success depends on the response of retailers and consumers who are already swamped by numerous claims about numerous new varieties.”

Steve Bryant, Seattle managing director and the North American food, beverage and agriculture leader for the MSL Group — who years ago worked for the Washington Apple Commission — also called the Cosmic Crisp marketing strategy “typical” but noted an interesting twist.

“One oddity: Missoula Children’s Theatre — Montana brings you Washington apples? Maybe I am missing something,” he says.

O’Rourke worries the industry has fallen so much in love with this apple that it is overlooking its many challenges. Privately, many growers worry too. With an unprecedented investment of 12 million trees planted in just three years, there’s a danger of over production, which reduces apple prices and profits. Typically, a variety is developed more slowly — over 20 years.

Those agencies include a California food-packaging company, a Montana communications firm and a California public relations firm, but none of those have ever launched an apple brand. PVM, though, is considered a pioneer in the branded apple industry, having secured the United States rights to the Pink Lady. After a rocky start for that apple variety with growers, and following some legal challenges, PVM launched a successful branding campaign that helped many growers make money.

Already, a number of large grocery companies plan to sell the Cosmic Crisp, including Walmart, Costco, Albertsons and Kroger, which all supported the request for a Cosmic Crisp PLU code, No. 3507.

But selling apples is tough, especially a new variety. MSL Group’s Bryant envisions a coming arms race: “That’s going to be interesting and weird,” he says. “If I’m trying to sell Pink Lady and three major marketers are selling Cosmic Crisp, it becomes who is going to give me a better price and spend more on display.”

Just like any other apple variety marketing, PVM’s team will leverage the healthy benefits of eating a Cosmic Crisp. But it will miss out on one of the hottest food-marketing trends today: promoting locally grown fruit.

While New York growers and marketers can play up the local angle due to their close proximity to say, Boston or other Northeast cities, local for Washington doesn’t even travel to Portland, says Steve Lutz, regional vice president of U.S. and Canada West at the Produce Marketing Association. “Historically [Washington has] invested more in marketing because (it) has to rely on markets that are farther away,” he says.

The PVM Cosmic Crisp marketing plan also includes working with WSU, but there are no plans to market the apple to WSU’s 31,478 current students or the 33,000 graduates who joined WSU’s Alumni Association or the tens of thousands of other alumni.

PVM will trot out WSU apple horticulturist Bruce Barritt, now retired, and his successor, Professor Kate Evans, for media interviews and there will be an October presentation of Johnny Appleseed by the Missoula Children’s Theatre in Pullman. PVM also plans to bring an astronaut and a space camp to campus.

Ultimately, consumers will decide the fate of the Cosmic Crisp — and with it the destiny of PVM, the state’s growers and WSU’s 20-year quest to create the Cosmic Crisp. “The big unknown is how consumers will respond,” Lutz says. “Can you get a cult following like Honeycrisp that will allow you to be successful and get premium pricing? The answer is I don’t know. If consumers respond to it, and like it, it can be tremendously successful.”

Brandt and Grandy are well aware that the annual marketing budget is small. When searching for potential partners, Grandy says one New York advertising firm told them, “You know, we spend more than $10 million making just one commercial.”

In the produce section, the Cosmic Crisp budget will be dwarfed by the $30 million annual marketing spent on the snackable, blue-boxed mandarin brand, the Wonderful Halo. It’s also considerably less than the $40 million the Washington Apple Commission previously spent establishing and maintaining the Washington State Apple brand in the U.S, funding that ended in 2003.

Says O’Rourke, “Miracles do happen, but I remain skeptical that Cosmic Crisp can be the sure winner so many in the apple industry expect.”

Honeycrisp is the biggest seller nationwide, with sales of the apple climbing to $796 million in 2018. Gala declined to $787 million, Fuji weighed in at $434 million and the Red Delicious sank to $319 million, according to figures from New York-based research company Nielsen.