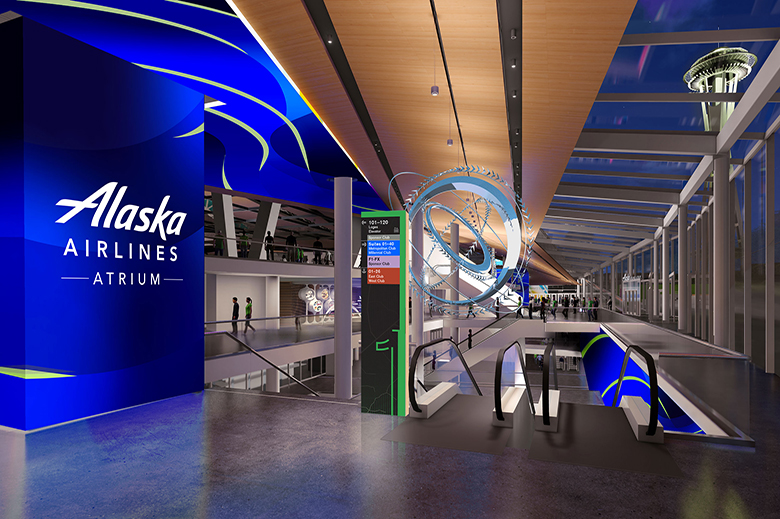 Rendering of the Alaska Airlines Atrium planned for the New Arena at Seattle Center (aka KeyArena), which is now under construction.

Alaska Airlines has scored a hat trick with Seattle’s new NHL hockey franchise by signing on as a founding partner of NHL Seattle, the New Arena at Seattle Center and the teams Northgate Ice Centre.

Oak View Group, which is redeveloping the arena, and Seattle Hockey Partners (NHL Seattle), the management arm of the new hockey franchise, said the partnership includes naming the New Arena’s atrium ― a 36,000-square-foot space on the south side of arena now under redevelopment ― “the Alaska Airlines Atrium.” Alaska Airline’s branding will also appear on the New Arena’s in-ice logo, dasher boards and during events ― both during games and in the community.

Details on what Alaska Airlines paid for the branding exposure were not immediately available.

“This is a fantastic partnership for NHL Seattle, the New Arena and our fans,” says Tod Leiweke, chief executive officer of NHL Seattle. “Alaska represents Seattle success and innovation and prioritizes service and experience in the same way we do.”

Alaska Airlines also sponsors a number of other Seattle Center-area destinations, including the Museum of Pop Culture and the Pacific Science Center, and it partners with the city’s WNBA franchise, the Seattle Storm, to support young women’s education and empowerment through various programs.

“I grew up playing hockey and love the drive and energy of players and fans alike,” says Alaska Airlines President Ben Minicucci. This is an incredible sport ― kids must really want to play, with early ice times and cold temperatures ― so anyone who winds up in hockey has to work for it. At Alaska, we get that, and we’re proud to be a founding part of bringing hockey to this great and growing city.”