$10 Million Women: The Next Level 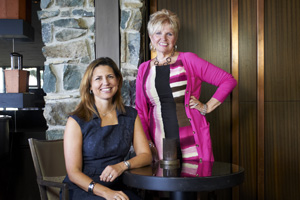 When Lisa Hufford quit her executive sales job at Microsoft in 2006 to become a consultant, she had modest ambitions.

She wanted the flexibility to travel less and spend more time with her children. Still, her new company, Simplicity Consulting, pulled in $300,000 in sales in its first year.

Other women who saw her success sought her advice on how to balance work and home life, and many ended up working for her as sales and marketing consultants to clients such as Microsoft and Amazon. The result: Revenues soared to $3.5 million in Simplicitys second year.

By 2008, Hufford had 20 employees. I really started getting bombarded with referrals, she says. She had to decide whether to continue to preserve her flexible lifestyle or expand her company. She took a full day to think about what she wanted, and decided to go for growth. To preserve time for her two children, Hufford was diligent about blocking out periods to attend events and be with them, and she encourages her employees and consultants to do the same.

Pursuing growth paid off handsomely: Revenues doubled to $7.6 million in 2009 and shot past $14 million in 2011. Today, as Hufford prepares to take Simplicity Consulting national in two or three years, shes already a member of a very exclusive club: Women who own companies with sales of more than $10 million.

Its not clear how many women are members of that club. But only about 20 percent of $1 million businesses owned by women ever reach sales of more than $5 million, according to the Center for Womens Business Research in McLean, Virginia. In Seattle, the $10 million club is so exclusive we could find only three other members: Jeanne Knutzen of Pace Staffing Network, Rosanna Bowles of the tableware company Rosanna Inc. and Paula Begoun of Paulas Choice, a skin-care company. The three founders of Chasing FirefliesDina Alhadeff, Amy Grealish and Lori Liddleleft the club when they sold their $39 million Seattle childrens apparel and gifts business to HSNs Cornerstone Brands in April.

More women are close to punching through that $10 million glass ceiling. Liz Lasaters Red Arrow Logistics, a freight-moving company based in Issaquah, generated sales of $9.6 million last year. Lisa Keeney McCarthy is within striking distance, too. McCarthy purchased Keeneys Office Supply in Redmond from her father in 1983 and has grown the business from $2 million to more than $9 million during the past three decades, all while reinventing the office supply company.

When we first started honoring women [who are] business owners through Enterprising Women magazine 10 years ago, we were amazed when we had entries by companies with $3 million in revenues, says Sharon Hadary, who has studied female business owners for more than 20 years, first as founding executive director of the Center for Womens Business Research. She now is principal of Sharon Hadary & Co., a Maryland consulting firm. We were thrilled when we had some at $5 million, and now we have a nice robust category over $25 million. Were seeing more and more women at [higher] levels of achievement.

Roughly six percent of male business owners reach $1 million in sales, about three times the proportion of female business owners who hit that benchmark. This disparity exists because many businesses owned by women, Hadary says, are started by those who want the flexibility to spend time with their families or pursue other personal interests.

Its less common among women to find founders who are driven exclusively by a desire to run their own companies. Among the exceptions are Begoun, of Paulas Choice, who always wanted to be her own boss, and Knutzen, of Pace Staffing, who had an early goal to build a strong company.

Yet even women who want to be their own boss tend to have more modest ambitions than men, says Hadary. Begoun, for instance, didnt think she would run a company with more than $1 million in sales. Yet she passed that mark twice, first in 1989 with Beginning Press, a publishing venture, and then in 1998 with Paulas Choice, the cosmetics firm she has built by being truthful about what certain ingredients canand cannotdo for ones skin.

I was shocked when I paid more money in taxes than I ever thought Id earn in my life, says Begoun about Paulas Choice. Ive always been surprised at the companys growth, year after year.

One obstacle to growth among female-owned businesses is a tendency by the CEOs to be conservative about finances. Hadary says women tend to avoid debt, preferring to expand their operations from cash flow. That approach restricts the amount of capital available for expansion and can inhibit growth. Bowles used a $15,000 home equity loan from the former Seafirst Bank, along with cash from savings, as startup capital for her company, now known the world over for its fashionable tableware.

Begoun and Hufford have expanded using internal cash flow. I havent needed [financing] because Ive grown the business by investing profits back in the business, says Hufford. Im also very conservative and I knew I didnt want to depend upon anyone else. Ive met with bankers and have a line of credit, but I havent needed them for anything.

She says she doesnt think the decision has hampered growth. And during the recession, when banks were reluctant to lend to smaller companies anyway, that approach may have been the perfect avenue for expansion.

Another obstacle to female entrepreneurs is sex discrimination. When Knutzen started Pace with a partner in 1975, she found banks reluctant to lend to her. My husband was starting a business at the same time as I was, Knutzen says, and we both went to the same bank [for startup capital]. He was given carte blanche for whatever he wanted to borrow, while they told me, Heres $3,000, which you need to pay back in six months or well have your head. It was almost laughable for us. We werent a capital intensive business; all we wanted to buy was furniture and have several months rent on hand.

Knutzen, who eventually bought out her partner, ran the Bellevue-based company from cash flow until 1987, when the traditional staffing firm transitioned to one offering temporary employees. At that time, we needed to finance a weekly payroll, because we werent being paid ahead of time by our customers, she says. It was then that I thought, Im running a business and I have to start paying attention to how we fund and grow the business.

One of the key differentiators between female-owned companies that only make it to $1 million and those that grow way beyond that milestone is financial acumen, Hadary notes. Larger women-owned companies are more likely to generate more financial reports more often and embrace them as part of their strategy to run and grow their businesses.

Hufford has that financial savvy, thanks to a business administration degree and international management concentration in college, as well as her experience managing multimillion-dollar businesses at Microsoft. But she is the exception. Prior to founding their firms, Begoun was selling cosmetics for several retailers and Knutzen worked as a recruiter. They learned finances on the job with the help of financial advisers.

Knutzen says that understanding capital, leverage and funding options did not come naturally to her. Not understanding that part of the business game, I tended to be too conservative during that time in my life where psychologically and emotionally I had an appetite for risk.

Later, by the time she learned it wasnt necessarily a good thing to be self-funded, I was losing my appetite for risk, she says. I didnt even know about the concept of leveraging my balance sheet until I was in business for 10-plus years, and that was a hole in my education/awareness that hurt my growth. Ive always had more ideas than the money to get them fully executed.

The latest American Express Open study on female-owned businesses suggests you dont find many with more than $1 million in sales because the owners sell or bring in other non-women owners at various stages of growth. Thats certainly true of Kathy Savitts Lockerz, which raised $36 million in venture backing in 2011, and Chasing Fireflies, the catalog company for childrens clothing, accessories and gifts that reached sales of $39 million last year and sold out to a larger business to grow to the next level. However, male-owned firms also bring in partners or sell out just as frequently, says Hadary.

While several women are poised to join the $10 million club in Seattle, the group will remain small. Begoun and Knutzen, who have both been in business for more than 30 years, are in the midst of succession planning. Knutzen has found a distant relative who plans to buy the business in the next couple of years while Begoun has been working on her companys future for more than a year.

Many women also have strong role models within their families. Three of the four $10 million Seattle entrepreneurs hail from entrepreneurial families, which, experts say, gives company founders inspiration, real-world knowledge and exposure to some of the risks of running a business. Knutzens dad founded Norm Nelson Inc. of Burlington, a potato grower and shipper now run by her brothers, while Bowles parents opened a sales organization in Seattle in the gift industry, Ray Bowles Sales Co. Begouns dad, Sam, founded and ran his own Chicago firm, Begoun Inc., a supplier of metal and plastic components.

Many business owners, both male and female, say being an entrepreneur is just in their blood, and they were born to be the boss. My dad told me nothing was as important as being your own boss, says Begoun, and that has been my mantra since Ive been 12 years old.